First Workout of the Year 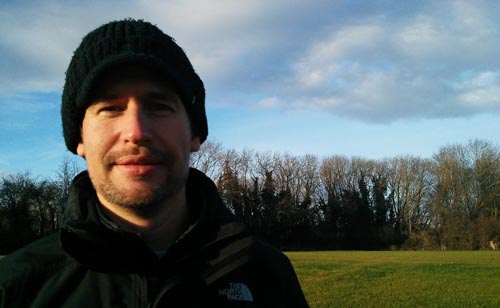 I just recently had my first formal workout of the New Year… on January 24th to be exact. This is likely a little later on in the year than many of you, and certainly later than the New Year Resolutioners, who have been populating the gyms during the early weeks of 2015.

From Christmas up till January 23rd, I had only engaged in physical activities for fun and/or relaxation: daily walks and a bicycle ride once or twice a week. I find those activities fun or relaxing, they refresh me physically and mentally, and in the case of cycling I get a rush as I speed downhill, bunny hop a manhole cover or pop an admittedly short wheelie. Whilst cycling up a hill may test my thigh strength/endurance and place somewhat of a cardiovascular conditioning demand on my physiology, I don’t primarily get on my bike with the intention of stimulating an improvement in my strength or conditioning. I save achievement of that intention for the more effective and efficient HIT or resistance exercise.

What happened to my body during that time? I certainly put on a few pounds of fat, which was primarily down to slackening off on my diet and enjoying the seasonal food treats associated with Christmas. The daily walks and the intermittent bike rides had little to no effect in curbing fat gain over this period.

Isn’t it a bit late for your first workout of the year?

I took time off from working out because I wanted to enjoy Christmas and New Year without thinking about (or doing) formal exercise. I extended that break into 2015 simply because it was a busy start to the year.

According to a review of the pertinent research, a protracted break from resistance training exercise can be appropriate. “Trained persons are encouraged to allow adequate rest (up to ~3 weeks) between training sessions without fear of atrophy”, Evidence-Based Resistance Training Recommendations for Muscular Hypertrophy (2013) Fisher J., Steele J., Smith D. Indeed the researchers go on to state that “those, who do take periods of up to around 3 weeks off from resistance exercise can potentially expect “greater hypertrophy upon return to training.” So, I’ve maybe got that going for me. 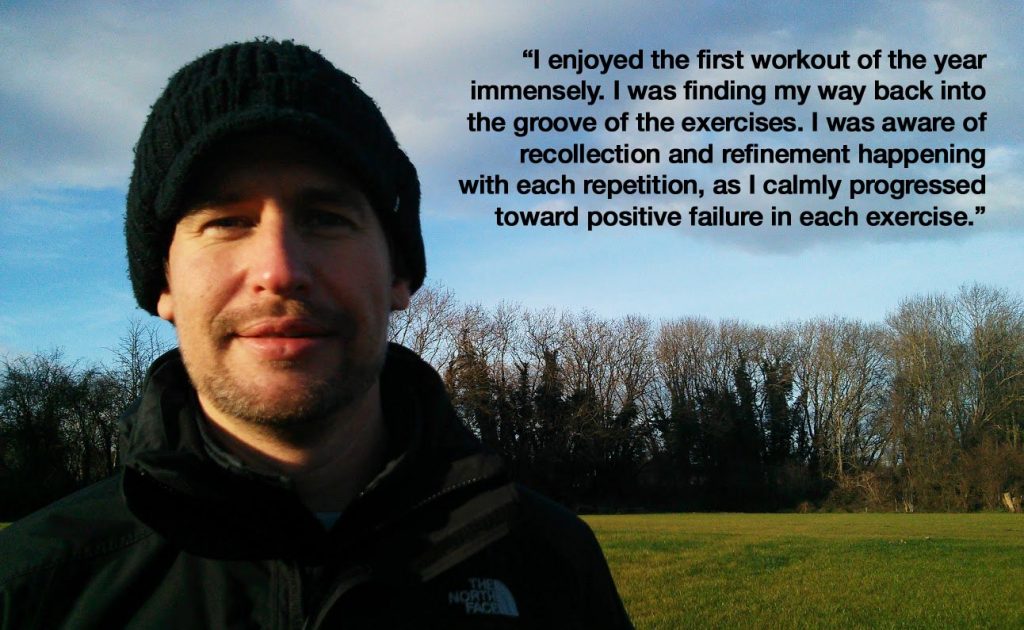 I decided to commence this year with that same workout routine that I finished last year with: partly to see what had happened to my performance of the exercises in that routine.

I reduced the load compared to the last workout of 2014, for each exercise by 5kg, except for the Leg Curl and the Leg Press, both of which I dropped by 10 kg.

I reduced the loads because I intended to focus on my performance of the repetitions and the quality of execution of the sets as a whole, especially after such a long period of time off. I dropped the Leg Curl load by more, because the last time I performed it my TUL was on the low side at 65 seconds. I dropped the leg press load by more because by that stage of the workout I was expecting to be pretty fatigued and gassed (due to an inevitable lack of conditioning to HIT).

My goal TUL for each exercise is currently 60-90 seconds and I achieved this in each exercise, except for… the Leg Curl and Leg Press both of which I exceeded 90 seconds in, by a considerable margin.

I enjoyed the first workout of the year immensely, the loads weren’t excessively heavy, I wasn’t struggling or fighting them: I was finding my way back into the groove of the exercises. I was aware of recollection and refinement happening with each repetition performed as I (relatively) calmly progressed toward positive failure in each exercise.

I felt a great sense of achievement to be back on the horse, to have clocked up my first workout of the year and to have done it well. I have set up to succeed for the year. I know I am engaging with an exercise protocol that can stimulate all the major physiologic benefits for positive physical change with just 1-2 weekly workouts of ~20 minutes a time. This is an approach that is sustainable, realistic and achievable for almost any individual.

Yet it is likely both a completely different protocol and a different experience to that which many new gym goers and those who reactivated their gym membership as part of a new years resolution, will experience.

Many of these people may now be beginning to drop out already: their resolution experiencing dilution every passing day. This usually happens in part, due to a rather common but misguided perception: that to be fit requires hours of gym going, split over at least 3-4 visits per week.

2015 needs to be a year that HIT and evidence based exercise attracts, engages and reaches more individuals: helping more people make positive and lasting physical changes that extend well beyond the first few weeks at the beginning of each year. And does so within realistic time investment parameters for appropriate reward.

As for me: it feels great to be back on it now and I’ve started back by pushing the frequency in the other direction for a while. I have completed 3 full body workouts in the first week back to see where that end of the frequency spectrum takes me after the protracted layoff. I’ll pursue that, until it appears wise to begin to reduce frequency, and I will do so at that point. Additionally, I will look forward to another extended layoff from resistance exercise sometime around the middle of the year and summer vacation.